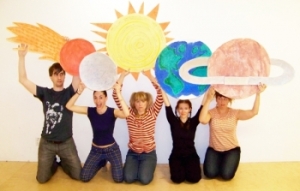 Director/writer Jeff Lewonczyk is second to none in his cross-genre fluency (see: Theater of the Arcade, his survey of note-perfect great-playwright styles with texts inspired by videogames). In The Ultimate Fate of the Solar System and Other Plays the sheer essence of stylistic environments is delved into, in a wordless review of tableaux told in motion and created with the cast.

The title segment is a to-the-death gradeschool presentation on the planets, in which juvenile animosities are played out in a grudge-match of dinosaur-killing comets, alien attacks and eventual supernova (score!).

“Cut Me Sideways” is a lurid pink-spotlit gang-dance sequence from some hipster crime-sploitation flick left on West Side Story’s switchbladed cutting-room floor.

“Bereft” is a living musicbox-figurine meditation on funereal loss, with haunted-house Victorian mourners in a pavane of fading communion that was one of the most truly beautiful visions I’ve ever seen in the indie theatre, a moving lamentation of how the living are ghosts of the time they had together with those who have gone.

Costume designer Juliann Kroboth outdoes herself with very economical means; in what is essentially a dance piece where character is setting, the crazed arts-and-crafts of the kids’ cardboard celestial bodies are the inner lining of an overworking id, the patterns of the street fighters’ designer sheaths are a cocoon of bygone chic spun straight from the neon, handbilled alley walls, and the draperies of the Victorian bereaved are a gauzy silt of sorrow and centuries.

In this empathetic ensemble none are more favorite than others, though if I had to choose this time the manic elegance of Cara Moretto and the tragic courtly grace of Stephen Heskett do stand out, or step forward. But all have taken a leap for the oldest and newest forms of theatre we can know. 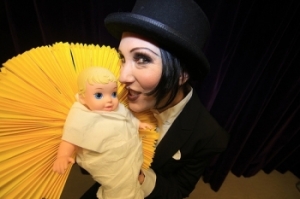 I stayed on to see Ich Liebe Jesus!, a tuneful onslaught through the bloody millennia of combative Christendom, framed as a profoundly uncomfortable Weimar Christmas pageant. It took a long time for something to scare me more than an old Andy Williams holiday special, but Ich Liebe has taken the territory.

There’s a star in the East and I think it’s Amanda LaPergola, who sings like a diva and moves like a sugarplum fairy possessed by Cthulhu and plays out a 256-color palette of hysteria, especially in a prolonged, lmao epilogue as the “Tea Party Girl” (yes, that Tea Party), when, after the production’s survey of history is all taken care of, it’s time to just start making shit up, in a tyrannical kids’ birthday presided over by LaPergola as the most grotesque and cathartic caricature imaginable of recent rightwing politics.

It’s sobering to think this brat almost became Vice-Fuhrer. But, like creator Robert Honeywell’s hilariously grueling act of dramatic sabotage overall, history never really ends, and Christmas is a season for every kid to get what they want.