The Sex With Robots Festival

We’re already the progeny of humanity and technology, inseparable from our peripheral tablet memory and satellite-guidance visions and virtual video adventures and the voices in our earbuds, and The Sex With Robots Festival, an evening of eight short plays and a musical prologue, reintroduces us to the heritage of machinery that advanced our imagination in the first place and the human feelings that drive it all.

The evening starts and ends on affirmations of the organic, bookended by an acoustic song-cycle by Nat Cassidy at the beginning and a passionate, tender bedside discussion (etc.) at the finish.

Cassidy’s Sparks Will Fly, like several of the episodes, draws on the rustic future of mid-20th-century cybernetic chic, in a tale of a lonely man who engineers suburban bliss the only way it can really never go wrong, by literally building a family. Sung in a catalogue of cocktail-croon voices to the original locomotive techno of blues and folk, it’s a small masterwork of the human mind making of others what it will.

Simon Says (by Richard Lovejoy & Eric John Meyer, who also star) is a tense carnivalesque tableau of an abusive prig dominating his mechanical-manservant, a macabrely humorous natural extreme of the 99-to-1 equation.

Sasha by Mac Rogers is a devastating tragedy of ill manners, cracking open the schematics of human emotional damage the way Rogers never fails to. A divorced man, played by Stephen Heskett with morose Don Draper mastery, is shopping for the simulated wife who will really give him what he wants, and the truth of what that is says much about the voluntary torture of bad marriages. Catherine LeFrere as the deceptively subordinate Stepford-wife and Daryl Lathon as the mod-Mephistopheles salesman are also fascinating, with cracklingly somber direction in an epic of menacing restraint by Pete Boisvert.

Girlfriend Repair by Micheline Auger constructs a hilarious technical metaphor for males deciphering the mechanics of female desire, while Just Right by MacCarthy is a terrifyingly truthful portrait of domestic abuse between a woman and her robotically re-created ex-girlfriend, pushing each other’s buttons in a nightmarish loop.

Taisetsu Na Hito by Leah Nanako Winkler reboots this as farce, with a soured straight married couple rediscovering their fire for each other in the cold reflection of their programmed housekeeper — until being in danger of actually getting to know her disenchants them all over again.

Zutter’s A Real Boy, with its data-crunching, jealousy-generating android gigolo tallying his patron’s flesh-and-blood partners, is a perceptive parody of the scores we keep on lovers, while Make Your Bed in Hell by J. Julian Christopher, about a sheltered geek’s literal technophilia, is a concept underdeveloped yet remarkably performed, especially by Natasha Yannacañedo conveying a lifetime of hurt and exasperation in a few minutes of conflict with a disappointing loved one.

My Fantasy Sex Robot Came in the Mail Today by Bowes belies its literal title with layers of delicate feeling and honest eros. Bowes is touching as an isolated but reflective fanboy, and Jennifer Harder is an elemental presence as his transitory lover, her motions writing a kinetic treatise on the expectations programmed onto women in her character’s assumption of roles and poses for his pleasure and her sad uncertainty when he makes the most baffling of demands, that she be herself.

The breakdown of our devotions in Sex With Robots’ ensemble of disillusioned intimates and the sanction of solitude in our embrace of technology are the tragedies at the heart of this evening — but in such sad understanding we repair connections and unlock the formula to know ourselves. 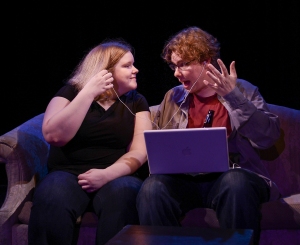 Rom-coms and sci-fi disaster movies fight for dominance at the multiplex like robots and dinosaurs, but Mac Rogers brings the two sides together in romantic sci-fi disaster plays — though the dysfunctional couples in his stories have a lot more distance to cross.

Fresh from his acclaimed Frankenstein Upstairs, which recast the created offspring in the context of a psychodrama (and cray comedy) about the family you choose and the one you literally make, Rogers enters Ligature Marks in the fifth annual Game Play festival, a series of stage productions and events based on the world of electronic and other gaming.

This one isn’t multiplayer but it has rotating personalities, with the show’s considerable dramatic weight carried by the duo of Rogers himself in the role of game-addicted malcontent Terry, and Rebecca Comtois as his ignored but still devoted ex Jill — as well as various neighbors, law enforcers and femmes fatales in the noir-fiction RPG they each become immersed in.

Jill is way too attached to the love interests she lets her personality be defined by and Terry is dangerously detached from any sustainable human contact (though he’s content to be dependent on Jill in a purely material way when he crashes at her No-town, USA apartment after a jail term for cybertheft).

Games, like plays, are where we can work out our shortcomings safely, and the spaces between Jill and Terry are played out in the settings of the fictional online NOIR game, whose scenarios of betrayal, intrigue and murder have a relationship to the couple’s real-life animosities and disappointments we’re never quite sure of.

Reality gives you endless chances to level up, and no choice but to do over, and we can accept the slow steps toward a life worth logging on for as a metaphor within the play we’re seeing, whether or not Jill and Terry are seeing it that way.

We are the spectators to Rogers as the magnetically dickish Terry, a slapstick stoner fellow tenant, and a more mature idealized version of himself, and Comtois (in an especially precise and powerful performance) as the needy but surprisingly self-possessed Jill, a skeptical and driven detective, and an updated, truthfully shaded noir femme fatale.  We don’t know what parts they’re really going through and what parts are an arm’s length (and typing-finger’s or texting-thumbs’ length) fantasy…but outside the screen of crimes and passions, it could be that, without any special disasters or adventures, we do violence enough to those we should care about, and the life we might have with them could be all we need.

Sci-fi fans and computer geeks are used to layers of reality and deceptive VR — and though Rogers muses in the program notes that he might be a strange choice for a play about gaming since he more identifies with noir’s automatic losers, he’s the perfect interpreter for what happens when those layers fall away, and no longer playing is the best chance to win. 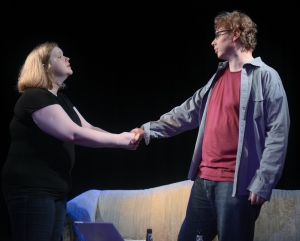